Readers who are familiar with my books know that a few of my heroines are healers. My first heroine who was a healer was Lil Prescott in Rebellious Bride, a western I wrote many years ago. She wanted to learn medicine and the old doc who taught her also encouraged her to learn from the ‘old woman in the woods.’

The research I did for that book got me eager to learn more about herbs, plants and the old healing ways. And naturally it got me writing about more heroines who were healers. I provided facts where possible and other times I speculated on what might have been.

I must say I admire the women of old who researched and studied herbs and plants and did their best to help the sick and suffering. They passed their knowledge on in hopes of it not only surviving but in helping others to expand on what they had learned. They suffered persecution out of fear and ignorance when all they did was offer help.

I think that’s why I’ve enjoyed making some of my heroines healers. They fought for their beliefs, even if it meant fighting the men they loved. Zia, the heroine from Under The Highlander’s Spell, was one of my favorite healers. Nothing could 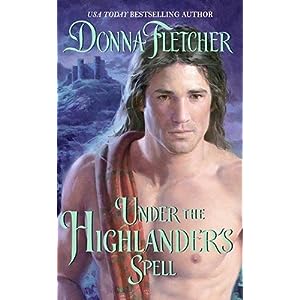 stop her; she was determined and didn’t think twice of rushing off to help someone in need. And Artair Sinclare was so practical, it took a bit to get him to understand her, but then they were really perfect for each other so it was only a matter of time before they got together. But never once did Zia give up her healing. It was a part of her, a part she couldn’t live without.

Lil was the same way. Even though she was forced into a marriage due to a compromising situation with fancy-pants, as she called him, Lord Rolfe Sherborne she refused to give up her interest in medicine. Like Zia, it was part of who she was.

My heroines are certainly resilient to say the least and even when they are accused of being witches they remain courageous and true to whom they are. Even my heroines who are witches, the Wyrrd witches remain true to their beliefs no matter the circumstances.

Whether women, witches, wise ones, romantic heroines or everyday women… there’s no difference, we’re all the same… courageous, strong and beautiful… and heroines every one of us.

Until tomorrow when the subject turns to… GHOSTS!