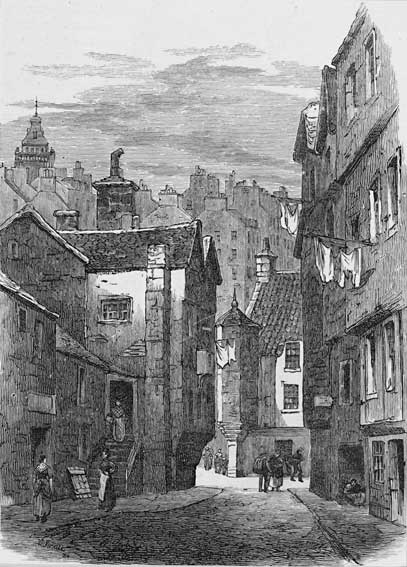 With his patience eroding rather rapidly Simon stepped out of his carriage and walked up High Street in the old town section of Edinburgh. The bright spring day was lost to him as he turned down one of the many narrow alleys that ran like tentacles off High Street.

He had risen early this morning, had seen to paperwork before enjoying a solid breakfast then late morning he had called on Miss Thornberry at the Bothwell townhouse. He had been told that she and Miss Emma Bothwell had gone to visit with Agnes McDonald.  He arrived at the McDonald townhouse to discover that the three women had left with plans to call on Rowena Horsley.  At the Horsley home he was told that the women had gone to see Janett Fiddleton and when he finally arrived at the Fiddleton’s and heard peals of feminine laughter flowing out of the sitting room he had thought his search over.

However, it had only begun when Agnes sweetly informed him that they had dropped Hypatia off on High Street near the silversmith shop. She had giggled and shook her head, her auburn curls bouncing like fat sausages when she had informed him that Hypatia had gone to visit Madam Rajavek a well-known medium in old town.

“Alone?” he had queried. Women, proper women, did not go wandering the streets of old town alone.

Agnes had assured him that Hypatia had been insistent. She had claimed she had a mission and nothing would stop her. Agnes had also coyly remarked on how American women lacked proper etiquette.

The aristocratic Scottish woman may be familiar with decorum but Hypatia possessed intelligence and ingenuity, which Simon admired and found a challenge.

He hurried his steps along the alley the odor of garbage permeating his nostrils, though it was not as strong as in other areas of town.  The flat and shop owners appeared to maintain this section with care.

Near the end of the alley a brightly painted sign swung from a metal rod reading Madam Rajavek, Medium.  The eye of Ra, the symbol for the ancient Egyptian sun god was painted on her front door and a bell tinkled sharply when he walked in.

He entered a small sitting room. Several armless red velvet chairs sat neatly arranged around the room and an oval wool rug, its red and green colors faded to muted shades covered most of the floor.

“I will be with you in a moment,” a female voice with a thick Russian accent called out.

Simon admired the ceramic bird collection arranged along the mantle while he waited assuming Madam Rajavek was busy with Hypatia.

“She is not here,” Madam Rajavek said emerging from behind the heavy green velvet curtain that separated the rooms.

Simon shook his head. “Excuse me—”

“The woman you look for,” Madam Rajavek confirmed with a smile, “has left.”

Simon nodded admiring the woman’s confidence and deception skills. She was tall and slim with stark white hair drawn back into a single braid that hung over her shoulder. Her bold blue eyes startled and though her few wrinkles affirmed her advanced years she somehow appeared ageless. Her dress was deep green, her shawl bright gold and red and edged with black fringe.

She was adept at her trade, convincing people she knew all and saw all. And Simon was a single man who had arrived just after a single female had departed. It did not take a genius to assume the obvious.

“Do you know where she went?” Simon asked, refusing to acknowledge her ruse.

Simon understood and withdrew two coins from his trousers and dropped them into the round silver dish on the nearby table.

“She made mention of exploring High Street.”

“On her own?” he asked incredulously.

“Miss Thornberry possesses an independent spirit that cannot be confined.”

“Independent and foolishness are two different things.” He was annoyed that the woman did not advise Hypatia on the perils of a lone woman walking the unfamiliar streets of Edinburgh.

“She is wiser than people credit her.”

He did not want to hear such nonsense even if he believed it the truth. Hypatia had no business going unchaperoned.

“She is unfamiliar with Edinburgh.”

“She is confident with herself,” Madam Rajavek said with polite firmness.

“Confidence will not protect her.”

“It serves as a forceful shield.”

Simon shook his head and turned to leave, anxious to locate Hypatia before trouble found her.

“She will discover your secret, though it will be safe with her.” Madam Rajavek smiled as Simon turned to face her.  She walked over to the silver bowl and scooped up the two coins. With a poised gait she walked over to Simon and reached for his hand. She placed the two coins in his palm and closed his fingers firmly over them. “I admire your courage. If ever I can be of help, please call on me.”

She turned and disappeared behind the curtain leaving Simon to stare after her.

With a mental shake of his head, he left the shop and made his way quickly out of the alley and turned right on High Street. He had not passed Hypatia when he had entered the alley so he could only assume that she had made her way north toward the castle.

He spotted her, a short distance away, across the street speaking to a man that looked anything but a gentlemen; a seaman perhaps who had seen better days.  He was a full head shorter than Hypatia and thin. They were engaged in what appeared to be a mutual conversation.

She looked stunning amid the clamor of the busy street. She wore a dark blue skirt and matching jacket, the lapels and wide cuffs black velvet, with a high-neck white blouse, a broach at her throat. Her deep blue hat sat dead center on her head, the brim resting upon her forehead with a wisp of black netting reaching her eyebrows. A tall, slim blue feather stuck in the side of her hat swayed in the spring breeze.

Madam Rajavek was right. Hypatia possessed confidence and it could be seen in the way she carried herself, as if she was impervious to all harm.

As Simon crossed the street the thin man nodded to Hypatia and walked off in haste.

“Lord Peregrim!” Hypatia greeted him with an enthusiastic smile.

He had thought she would be perturbed with him for refusing to tutor her in the art and perils of witch hunting.  Her salutation, however, was one of pure delight and he had to admit it warmed his heart considerably.

“Miss Thornberry,” he acknowledged with a nod and was about to offer his assistance to her when without preamble she slipped her arm around his.

“You’re just in time, Lord Peregrim,” she said with excitement. “You see there is a shop I wish to visit and I’ve been advised that it isn’t a place where a proper young woman would go unattended. Would you be so kind as to accompany me? I promise I will not dally and keep you long, though I must be honest and inform you that if it is a treasure trove of interesting objects I may be longer than expected.”

“It would be a pleasure, Miss Thornberry,” he said before she continued on and he had no chance to respond.

“Wonderful.” She gave his arm an appreciative squeeze.

The light pressure of her fingers startled him though he made no show of it.  She had actually set his blood to racing like a young school lad enamored by a lassie.

“Are you familiar with a shop called Treasure Chest?  I was told it was nearby, down one of these narrow alleys, which appear fascinating to explore, though I assume unsafe for a woman alone.”

Her deep blue eyes sparkled with anticipation and ignited his adventurous soul. There was an excitement to Hypatia that was contagious. She was an adventurer like him; a hunter who enjoyed the hunt; a seeker who sought the unknown, a woman who challenged life, a woman of passion.

He tempered his thoughts and calmed his excitement so that he could answer her accordingly. “I know of the shop. It is far from a treasure chest.”

“I would love to see it for myself.”

“It is dusty and dirty.”

“All the more exciting,” she said, giving his arm another squeeze.

He smiled, delighted with her enthusiasm. “Then, Miss Thornberry, I suggest we begin our adventure.”

“Oh, I love adventures, but if we are to be partners then you must call me Hypatia.”

He did not bother to correct her misassumption that they were partners, though he did favor calling her by her given name. It was uncommon and suited her well. “Hypatia. And I would be pleased for you to call me Simon.”

“I would be too,” she said as they began to walk. “Titles can be so confusing and so unfriendly.”

Simon listened as she chatted on about titles and not at all understanding them and really, what purpose did they serve but to separate people. When he could, he interjected his opinions, which she commented on and he soon found himself engaged in an intelligent debate he thoroughly enjoyed…  when he could get a word in.

The shop window was covered with a fine layer of dirt and grime but did not distract from the treasures it displayed. Hypatia looked with wide eyes at the array of objects jammed into the small space, Oriental vases, intricately carved chests, heavily ornate chairs and more.

“We must go in,” she said and let go of Simon’s arm to open the door.

Simon stopped her, his hand covering hers when she reached for the door handle. Their eyes met and held, as if they searched within the other and at that precise moment a strange tingling raced through them and they shivered.